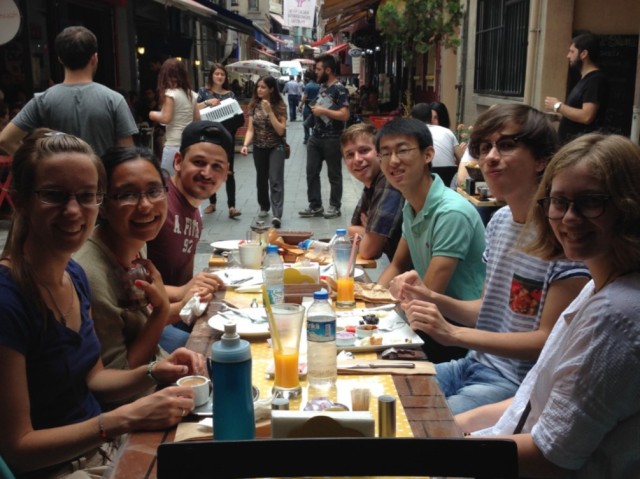 Cru student mission team members and friends enjoy a meal together in the Middle East.

What’s the craziest dream you’ve had?”

Kevin, a Middle Eastern student, shocked his new American friends with his response. It reminded them of the book of Revelation.

Kevin* vividly remembered a dream when he was eight. He was in an empty desert. Then he saw a huge castle with a door wide enough for one person. Through the door he saw a giant, radiant man seated on a throne. The man was “more glorious than anyone could imagine.”

Suddenly, the man became the size of a human. “Kevin, come sit in my lap,” he said.

“Who are you?” Kevin asked.

Jesus gave Kevin water to drink and showed him his kingdom. Kevin saw many people in white robes. He sensed that he knew some people, but not all of them.

When he awoke, Kevin asked his Muslim mother who Jesus was. She replied, “He is just a prophet.” Kevin forgot the dream that day, but ten years later, over lunch with a group of guys from New England on a Cru Summer Mission Trip, it popped back into his mind.

Kevin got goosebumps as the Cru students had him read Revelation. What he had dreamt was in the Bible!

Eagerly Kevin studied the Bible and attended church with the Cru students. He has connected with other Christians in his country and is learning about Jesus.

Thank you for partnering with us as we provide the behind the scenes help that make these trips possible. You are changing lives!

* Kevin is not his real name.

This entry was posted in Uncategorized. Bookmark the permalink.